Big Kids on the Playground

As promised, here is the second post about the North Creek Park outing during the first week of school. After everyone had explored the boardwalk and other trails in the park, we all gathered at the playground near the wetland. The youngest student in our party was 8 years old and the oldest 18. With the exception of one surprisingly challenging piece of equipment, the playground was a fun diversion. It's always fun to see older Clearwater kids play with abandon and without self-consciousness, especially in a playground built with with much younger children in mind. 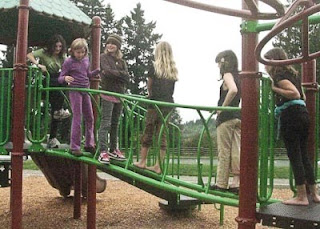 A gaggle of girls on a bridge 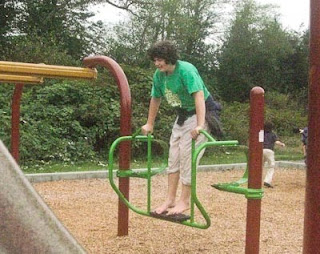 A big guy can get a big bounce 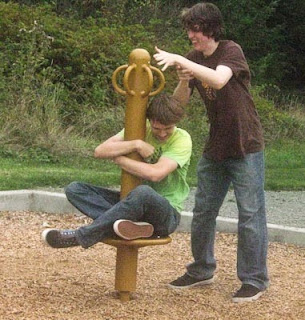 Cass (on pole) and Braden

The equipment pictured above was challenging, especially for the oldest, biggest kids, and was the source of much experimentation and discussion. It's a large pole with a platform for sitting or standing that rotates when someone pushes either the person on it or the handles at the top. Unlike a merry-go-round, riders have to be close to the pivot point. 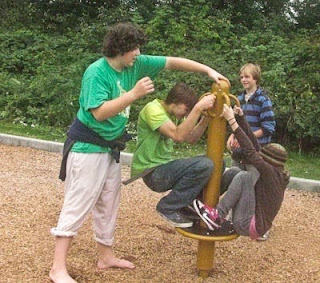 It turned out to be devilishly difficult for big, tall students to even stay on, despite bigger muscles and dogged determination. In addition, several older students looked positively green after just a few seconds spinning. The champion spinner was 10-year-old Keenan, whose pole-spinning enthusiasm and stamina was inexhaustible. She had no trouble hanging on, felt dizzy but never sick, and earned the respect and admiration of the 13- to 18-year-old guys in the group. 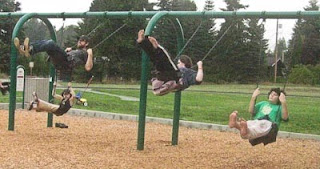 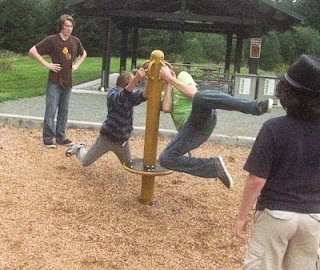 Older students continued to work at the spinning pole challenge. Some decided that rather than trying to hang on to the pole, they would take advantage of the centrifuge effect. They clung to the handles at the top, ran and launched themselves. For a few thrilling and satisfying seconds, their bodies were airborne. 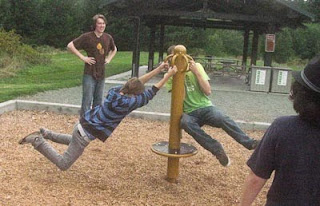 Not to be outdone and in spite of her awesome ability to hang on to the spinning pivot, 10-year-old Keenan got in on flying, too. 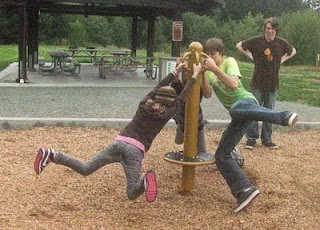 Keenan and Cass (Lucas behind pole) 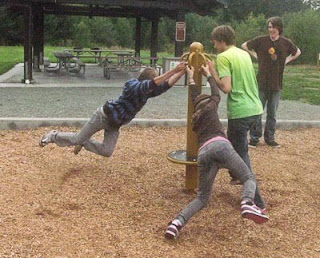 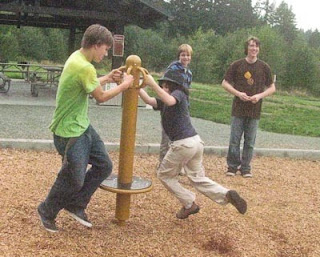 As a staff member, I have the privilege of watching Clearwater students metaphorically spread their wings--maturing, experimenting, developing skills, taking leadership, discovering and pursuing passions, offering empathy and compassion, to name a few examples. How exhilarating it felt that day at the park to watch the physical embodiment of the very real and important flights that Clearwater students take every day as they figure out what's important to them, develop relationships, and work hard to achieve their goals.

We install paths for golf courses too. EPDM golf pathways can be installed in a range of different colors to improve the overall look of the course. Look at this