Last Monday I played a very, very long game of Mao with Maddy, Lucas, Jacy, and Alise. Mao is a card game, more or less like Uno, complicated by a few unspoken rules which players must learn solely by observation and deduction; by watching others keep the rules, or by figuring out why someone penalized them. At the end of a round (when a player successfully discards her or his last card), the winner gets to make a new (secret) rule, and the game goes on.

For some reason, our game seemed to take a record-breaking amount of time. Players would get down to their last card, and then be unable to play it, winding up with ten or more cards coming into their hand. Frustration was running high. Several times people stood up and slammed the table or muttered "I  %#@* HATE this game!"--and then kept on playing. (They had to complain under their breath because it's against the rules to speak during Mao.) Lucas finally did quit in exasperation, but the rest of us doggedly kept at it (mainly at Maddy's insistence) until someone--anyone!--finally won. The relief in the room was palpable. I don't even remember who played the final card.

I figured that I'd have a hard time convincing anyone to play Mao with me again, and the next time I was driving up (that Friday), I mentioned it to the students in the car. "Yeah, I doubt it," said one. "They're sick of that game. They've been playing it all week!"

Which teaches me, once again, that I don't always understand what it means when someone expresses frustration.
Posted by skholiast at 9:31 AM No comments:

DIYU, Edupunks, and the Changing Face of Higher Education

Two summers ago I read Anya Kamenetz's eye-opening book DIY U: Edupunks, Edupreneurs, and the Coming Transformation of Higher Education and intended to write a summary to publish here, but never got beyond the research point. The book is incredibly content-heavy, and I'd already summarized Shop Class as Soulcraft: An Inquiry into the Value of Work.
Fortunately, much of the content of this book is now available online, and if you are interested in what our kids are going to face if they want to continue their educations beyond Clearwater (or beyond anywhere, for that matter) you owe it to yourself to visit the DIYU web site. There was also a great article published in the Sept. - Oct. 2011 edition of Utne Reader, but the link to the article wasn't working when I tried to view it.

Our kids are especially prepared to navigate this quickly and dramatically changing industry, and if they are going to be savvy education consumers they will need up-to-date information.
Posted by Karen at 5:42 PM No comments:

This video is being posted by popular demand. The footage is from last year and includes; parts of a documentary by Leo, rough footage from the making of an unfinished short film, a game of Mafia, and some other random shots (there was limited footage available at the time of editing). The song is "Victory Dance" by My Morning Jacket and was played loudly on the bus during the many summer school field trips. The video is kind of silly, the song absolutely rules!

Samadhi has been a student at Clearwater for 9 years--he enrolled when he was four and is now almost 14 years old. He has been drawing since he was six and began making comics two or three years ago. 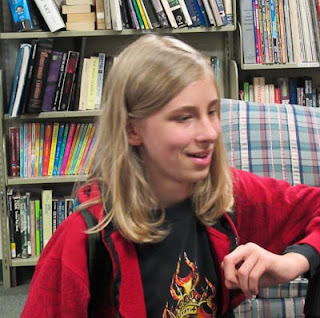 This year he started writing and illustrating a science fiction graphic novel series titled Cosmos. He has completed 16 pages in the first of seven planned books in the series. Book one is subtitled "Sol System", and will be around 200 pages long. He is using Adobe Photoshop to color the comic.

Samadhi has another comic series in mind, also science fiction. He maintains he cannot make a comic series without outer space in it. He explained that the humor in his comic is inspired by Douglas Adams' The Hitchhiker's Guide to the Galaxy, which combined sci-fi and comedy so well.

Many graphic novels fill Samadhi's shelves at home. Some of his favorites are Bone, Usagi Yojimbo, Amulet, Missile Mouse and Lackadaisy. He admires the last one because it is well drawn and combines comedy and drama.
Without further ado, here is Cosmos. Many pages are followed by Samadhi's comments. Click on each image to enlarge for reading. 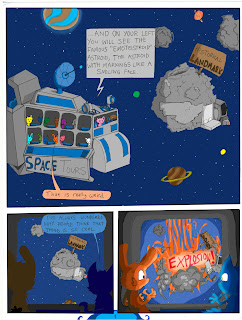 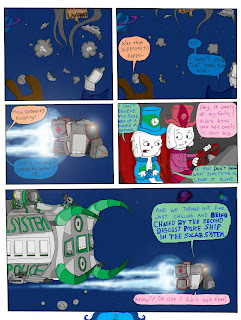 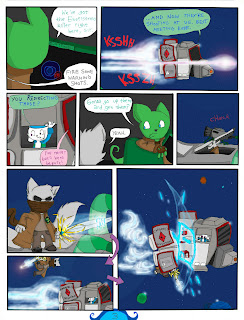 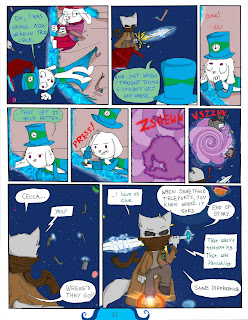 Page 004 The Vanishing...
(click to embiggen)
And, now The Title Page! 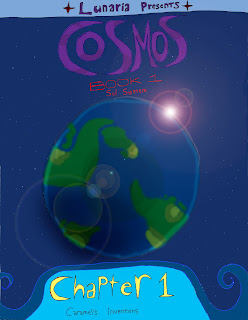 (Click to embiggen and discover the name of this Opus)
And The first page of the actual comic! 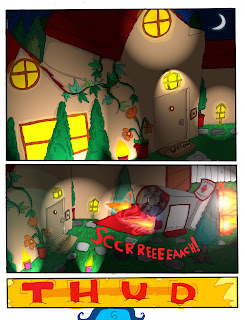 (Click to check out those awesome night time effects close up) 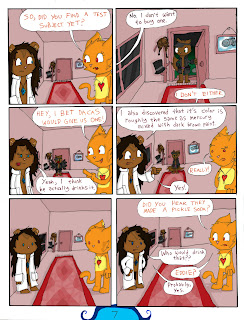 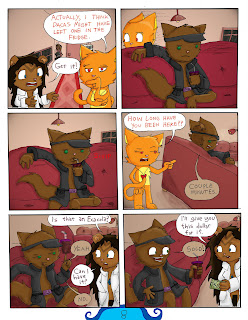 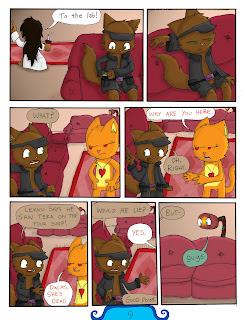 Page 009 (Lamps with eyes are the best kind of lamps. I’d totally buy that lamp.) 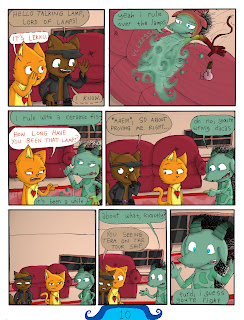 Page 010 (Oh wait no that’s no lamp. Shocking twist. What is even this guy’s deal with these lamps.) 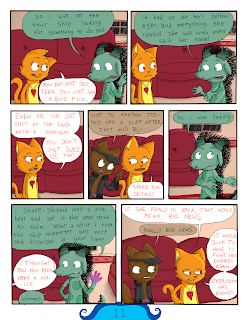 Page 011 (PLOT!! That’s a sound effect that needs to be used in comics more often.) 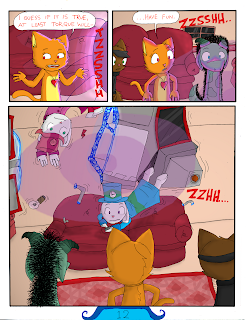 Page 012 (Shocking twist #2. Man Lekku what is even up with your mane in that last panel. Brush strokes eternal.) 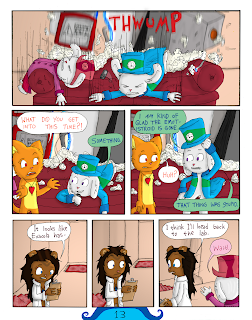 Page 013 (Motion blur always. I have to draw those couches so many times i will just drop a spaceship on one, which just actually happened. Oh wait now it’s harder to draw. Dang) 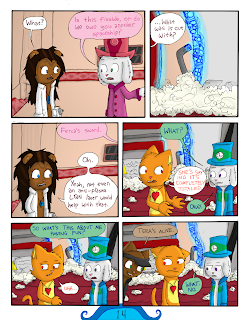 Page 014 (See, when you cut something with a sword that looks like a peeled banana it clearly can’t be fixed. This is what happens in my world.)
How many couches CAN I destroy???????? Next on Cosmos!


Samadhi's comic was first published on his mother Roseanne's blog, Breaking Sod, in three installments: one, two and three.