Lugging the soaking-wet carpet and padding up from the flooded basement of one of the school buildings in the aftermath of last week's storm was a huge chore. Staff slashed the stuff up with box-cutters and I went and recruited a few strapping teenaged students to help pull it out to the garbage.
Read more »
Posted by skholiast at 11:08 AM No comments:

Trivia Quiz on the Clearwater Bus

We regular riders of the Clearwater bus look forward to Trivia Thursdays on the bus ride back to Seattle. Thad comes up with the vast majority of the trivia questions, though Kallisti, driver and staff member Matt Garrity and a couple of other student riders have also contributed some stumpers. Thad is highly knowledgeable about many topics. One of his areas of expertise is geography, so we've all gotten a little better on that topic, thanks to his geography questions. Thad graciously agreed to go through past trivia quizzes and pick 20 of his best questions for readers of this blog.

On the bus, we don't allow ourselves to access the internet; we depend on our collective knowledge to come up with what we hope is a correct answer. We also pick someone who is authorized to give our collective decision as the final answer.

To make this a reasonable challenge for you, the answers are "beneath the fold".  Pretend you're on the bus and don't peek before attempting to answer all the questions. Feel free to consult with others in your company, but don't use the internet. If you'd like to comment, it would be fun to know if you found the questions easy or difficult and how many you were able to answer.

Feel free to put some trivia questions of your own in the comments. We're always looking for great trivia for our bus ride home.

Q3: What was the last time the U.S. officially declared war?

Q5: The funk band well-known for their hits "Low Rider" and "Why Can't We Be Friends?" combines with a slang term for "goodbye" to make what classic novel?

Q6: What famous murder prompted research into the phenomenon now known as the bystander effect? You must name the person killed.


Q8: What are the shortest and longest Beatles songs?


Q11: This Serbian film is renowned for its terrifying content; it was subject to a police investigation and banned in Spain, Brazil, Norway and an Australian province.

Q12: What is Brunei, out of the following?
1) A province of Malaysia, bought from Indonesia
2) An independent monarchy with a developed economy
3) A now defunct nation; it was annexed by the British in the 19th century and remains a territory of the UK
4) An island of Indonesia famed for its early role in the sugar trade

Q13: In which modern country was Christopher Columbus born?

Q15: On what day of the week was Easter Island discovered?

Q16: Name the four locations (other than the USSR) named in the Beatles song "Back In The USSR".

Q18: In the modern British Monarchy, which is higher ranking: Earl or Baron?

Q19: What are the two closest living relatives to humans?

Around the School Photos

I don't know if you've heard, but Clearwater is (still) revamping our web site. I was given a short list of photos the designers want, and I've taken a few hundred this week. Here are a few - maybe worthy, maybe not, but interesting anyway. 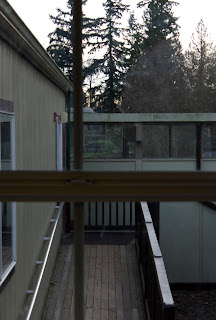 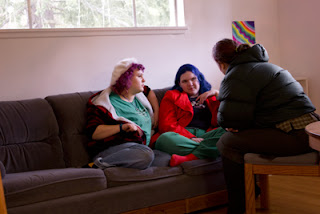 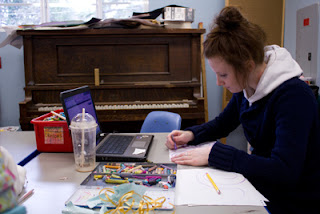 Those of you who have been following Meghan's original story set in the Warcraft world are long overdue for the third installment. If you haven't read or don't remember the story so far, be sure to check out Chapter 1 and Chapter 2.  If you'd like to re-read the first chapter, click on the link above, then enjoy Chapter 3, below. The story is told from the point of view of Salith, a female half-elf, half-troll rogue.

Salith awoke to the sound of thunder rumbling in the distance. She got to her feet and looked out of her cage at the sky where clouds so gray they were almost black gathered on the horizon.

“A storm is brewing,” she said, grasping the two nearest bars and gazing out at the darkening sky.
“Indeed.” A cool voice came from behind her.
Startled, Salith whipped around and bared her teeth.
“Who are you?” she demanded as thunder rolled once more.
“I am known as Delaralas(1),” the stranger replied.

He wore a long emerald cloak and leather garments, half-concealed by the cloak. As he pulled down his hood Salith realized he was an elf, with long purple-ish ears and markings painted across his face.
“What are you doing here?” Salith’s accent faded and she hid her tusks.
“I am here to rescue you. Don’t bother hiding them, I know what you are,” he said.
She scowled and showed her teeth, eyes flashing.
“Why would you come to rescue me? You’re an elf of high-birth and I’m nothing but a lowly half-breed. I don ‘t get it.”
Delaralas shook his head and exhaled softly.“Heh. Neither do I, my friend, neither do I.”
Salith spat contemptuously while lightning flashed behind her.
“Anything but, elf!”

Delaralas actually laughed, echoed by thunder, closer now than before.
“Come now, you don’t want to be stuck in here when that storm hits, now do you? Grab my hand and we’ll get out of here,” he said, sticking out his hand and stuffing the other into his robe.
"I’ll have to trust him…" Salith thought.
She grabbed his hand and just as their palms touched, the storm broke.

I asked as many Clearwater students as I could this question:

Were you happy, or unhappy, or did you have mixed feelings about the end of Winter Break and coming back to school?

The same day I asked it to the 4th/5th graders in my own after-school class at a Seattle public elementary school.

(The results are below the fold.)
Read more »
Posted by skholiast at 6:00 AM 1 comment:

Meghan talks about the LARP

Here is a short video featuring an interview with Meghan Conken about creating a live action role playing game at the Clearwater School. The video does not do justice to all of the behind the scenes planning that Meghan and staff member Mat R. did to help create and manage each players character profile nor does it capture a big moment in the LARP but it does offer a small glimpse into the beginning stages of how it began.