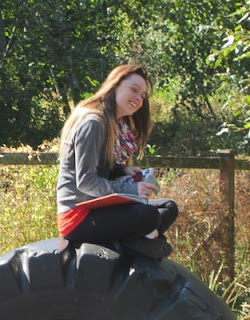 Eighteen-year-old Emma is relatively new to The Clearwater School; she has attended since January 2012. Before that, she attended Woodinville High School. One day, in Emma's English class, her teacher talked about different educational philosophies, including Clearwater's Sudbury philosophy. [Her public school teacher was Christine Traxler, whose 9-year-old daughter has been a Clearwater student since she was three years old. Christine recently gave a presentation at a Clearwater public forum about why she chose Clearwater.]

Until Emma was 12 years old, she wanted to be a veterinarian. "One day when I was 13, I thought, 'who helps the people who help the animals?'" She decided she wanted to be a medical doctor. "Until a year ago, it was a big dream of mine. [My parents and I] looked at medical schools."

To achieve her career goals, Emma planned to attend an Ivy League college, but in public school "getting a 4.0 [GPA] was not happening." She believed she wouldn't be able to be a doctor because everyone told her she needed straight A's. "I forced myself not to want becoming a doctor. I know now that I could become a doctor, but I don't want a doctor's lifestyle."

When Emma first enrolled at Clearwater, she studied SAT test prep materials for two hours every day to improve her SAT score and prove to her parents that she would put her freedom and unscheduled time to good use. "I took the SAT once and didn't do well. I didn't study for it and didn't care. I've never been able to take a test well, because of nerves and worry. It's something I'll have to face."

Build it and they will come!

Gregory demonstrates how to build a really tall tower during Clearwater's Play Group program. The part time program is designed for younger students and is a great introduction into the school environment. 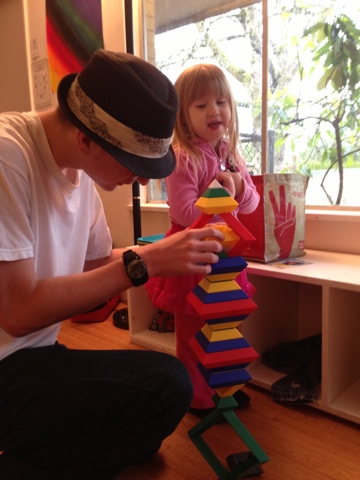 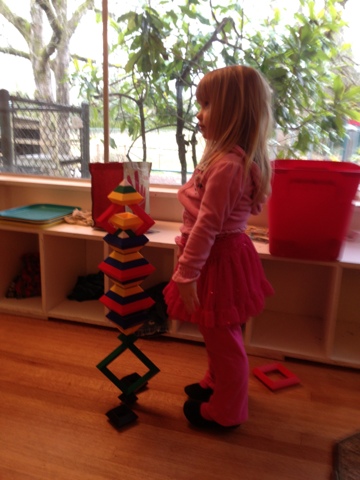 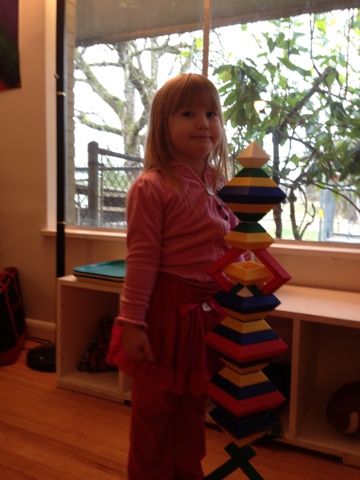 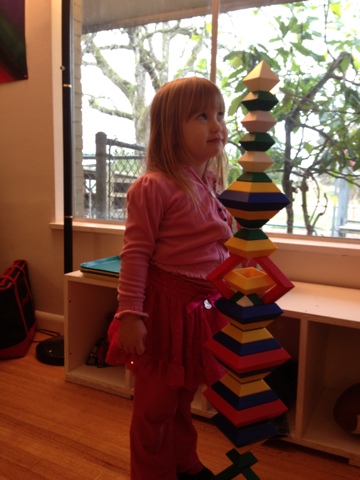 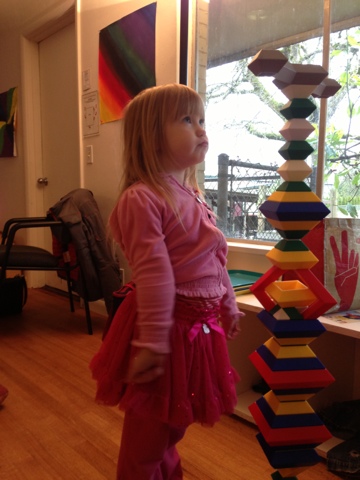 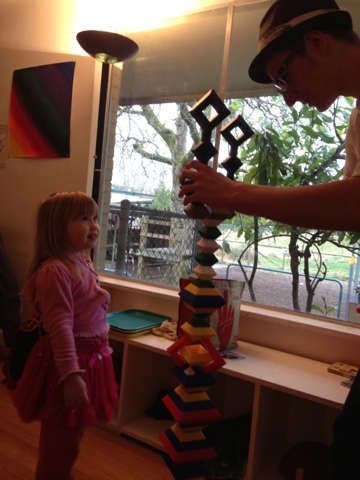 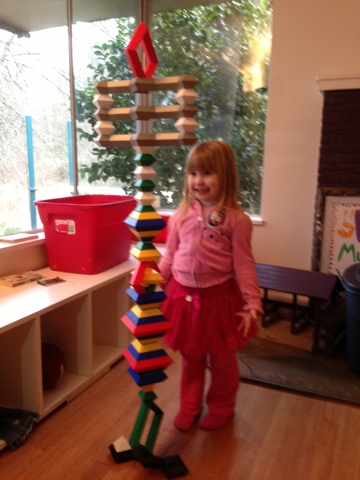 If you're curious--or know people who are curious--about how Clearwater students learn anything and become confident, capable and skilled adults when they are free to decide how to spend their time at school, Family Information Nights are for you.

Family Information Nights are free and open to the public. They are wonderful opportunities to get a basic grounding in Clearwater's educational philosophy and practice. In addition, students, staff and parents will be available to answer questions, and to talk about why they chose The Clearwater School and how it has affected their perspectives on learning and their family relationships.

Parents, children, educators, and the curious are welcome. Light refreshments will be served. For more information, call 425-489-2050 or email.
Posted by Shawna at 3:27 PM No comments:

by Karen Hyams, parent
[photos taken at The Clearwater School]

I’m the mom of a 17-year-old who has only taken two tests since first grade. When, at 15, he took a test to see if he could take freshman English at , I was as curious to see the results as he was; we had no past test-taking experience to compare. He might have done well, he might have done poorly--nothing would have surprised me. When he did well, it further bolstered my belief that you don’t need to spend years “practicing” test-taking. 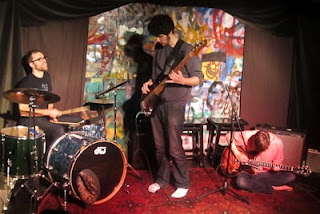 From the Apgar score on, kids in our society are measured, compared, percentiled, assessed, and sorted so much that we parents seem to have become addicted to a constant stream of data. When my family decided to stop getting that information, to change to a school that didn’t test, the decision was easy, but living with it later wasn’t so simple. 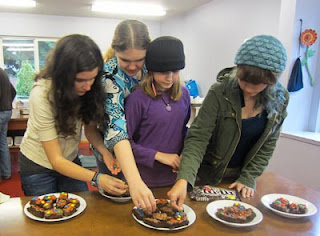 Leaving testing and homework behind had an immediate impact on everyone in our family. Free from constant comparisons to friends in class, my child was able to be himself and not contend with any hierarchy in the classroom. He got goofier and much, much happier. A “no testing” culture meant no running through tedious exercises designed for the test, no sorting by ability to read, no fights about homework. 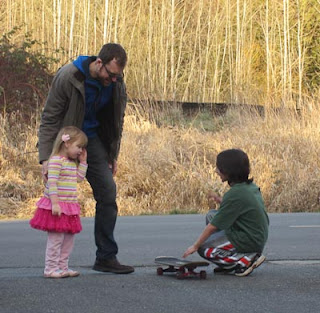 All of that was good for us, and there are too many other good things to list. What I didn’t expect was to panic a little without that steady stream of mostly meaningless information. I wondered, is he learning to read? How is he doing socially? His days were unreported, his highs and lows private. The only way I was going to find out how things were going was to talk to him. 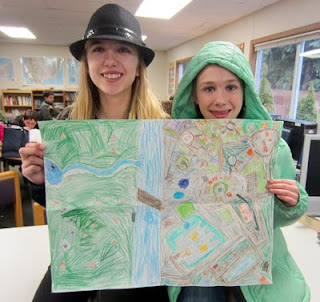 I wish I could tell you that talking to him made me feel better, but it did not. He didn’t tell me any of the things I was hoping to hear, and I didn’t hear the meaning of all of the wonderful things he did tell me. It took a lot of practice for me to stop looking for those things we’ve decided kids need to know, and to see the things that had room to grow once they had the space. Once I really learned to see my child outside the context of measured education, I was able to hear his stories and see the growth they represented. 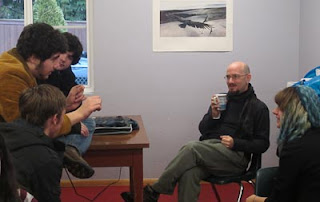 Ten years later I still talk to my son to see how things are going, but I don’t do it out of worry anymore. Even though he is of the age to start seriously thinking about college, I’m not concerned with his lack of a transcript—I’ve seen plenty of kids like him get into school and thrive, and then thrive after school as well. And if he decides not to go to college when he graduates, we’ll all be OK. I’ve learned to trust his instincts; I learned that by listening. A report card wouldn’t tell me half as much as he does. And I’m talking about a 17-year-old boy, one who isn’t very forthcoming. He’s the expert on himself; he’s the one who knows how he’s doing. Why would I trust a standard list of grades more than I trust him?
Posted by The Clearwater School at 3:22 PM 4 comments: