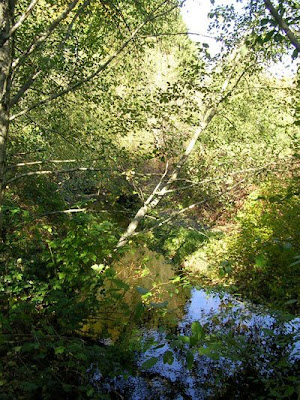 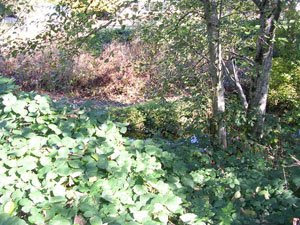 Access to North Creek was one of the school’s top reasons for purchasing the site in 2006. Students and staff have a great interest in the creek. Beyond the enjoyment of being near moving water, we have spent hours studying spawning behaviors and lifecycles of salmon. In 2006 we observed the majesty of Sockeye, Coho and Chinook salmon navigating up the creek and spawning along the school and Commons properties. Sadly, over the past two seasons we have seen a dramatic decrease in the numbers of fish returning to spawn. 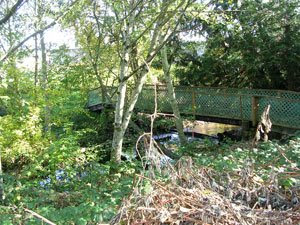 During the past two years, Clearwater families, Snohomish County Surface Water Management and the Conservation Corps have worked to control invasive plant species, including Japanese knotweed, blackberries, tansy and thistle. This project has the potential to support Steelhead trout and Chinook, Sockeye and Coho salmon species. It will also improve the overall health of North Creek by nurturing greater diversity of animals and native plants. 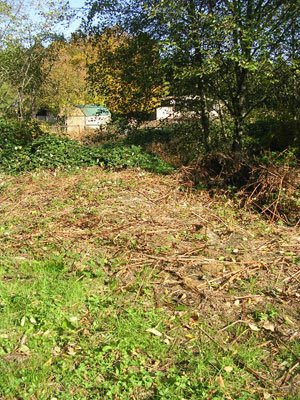 The grant funds will help to finance restoration efforts, focusing on restoring creek banks eroded during the Winter 2007 storm. Snohomish County designed a plan to restore the creek and adjacent habitat to a healthy ecosystem in the most natural state possible. In December, a crew from Snohomish County came out to survey the part of the creek outlined in the grant. They also took core samples in two different places in the thistle field closer to and farther away from the creek. It turns out that much of the thistle field is fill dirt and the natural flood plain soil is around seven feet below the surface of the field. School Meeting authorized Snohomish County to remove much of the fill and create a more gently sloping bank that will be planted with native shrubs and trees. This will create an inviting and rich area to explore and better creek access on the east side of North Creek. Work is scheduled to begin in 2010. 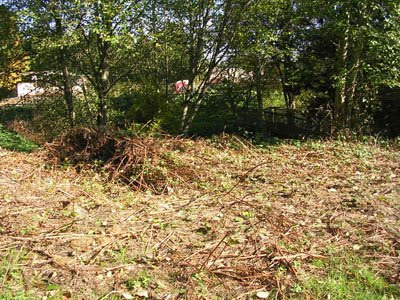 Clearwater will donate in-kind volunteer hours to this project and involve members of our school and the extended community. We are lucky that our families include skilled educators, naturalists, landscape architects, and engineers, as well as dedicated laborers. 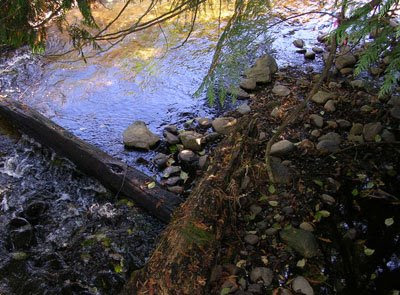 Our aim is to demonstrate that individuals, schools and government entities can work together to make a needed difference for our environment. We hope our involvement in this effort will inspire future projects in other locations. 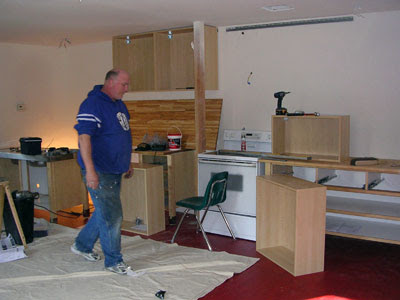 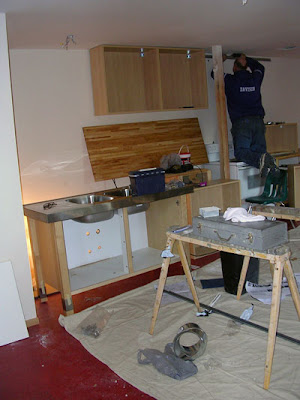 A look at the new computer room

After hearing about the "new" computer room, maybe you'd like to see it? 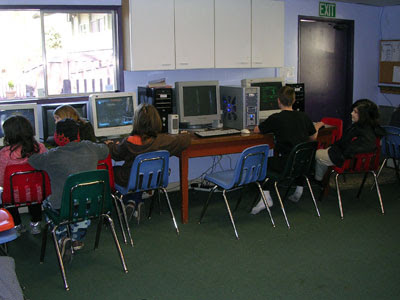 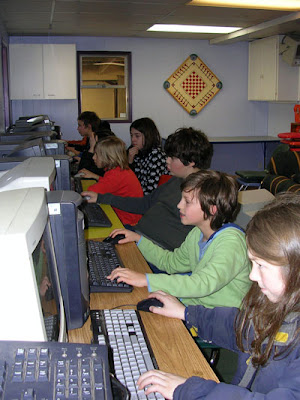 At the moment there is some extra furniture in the room, since there are still two major rooms closed for renovation. Things are a little crowded, some furniture has not found a place to belong. Yet the new computer room/old media room is nice and big, and has two doors and plenty of windows, which should help with keeping the room cool in warm weather.
Posted by Karen at 1:25 PM No comments:

Email ThisBlogThis!Share to TwitterShare to FacebookShare to Pinterest
Labels: Remodel

The Christmas Caroling Concert originally scheduled on December 18, 2008, was cancelled when snow closed the school that day and the next. Then Winter Break began.

All the carolers wanted to reschedule the concert in January, and we set a new concert date of January 15. Another student who hadn't rehearesed in the fall joined us, so we had a total of nine singers. Two singers were recovering from illness and a dental procedure, and arrived half an hour before the concert. Earlier in the day the seven singers at school had practiced again and again a wave bow that everyone wanted do to end the concert. The two late-arriving singers practiced the bow a few times with everyone before showtime.

The rescheduled concert was attended by a good-sized audience, and it was obvious how hard the singers had practiced and how much they enjoyed singing. With some consternation I watched and listened as, in between songs, singers announced to each other and the audience that something didn't work as well as they wanted it to. Then, I relaxed and realized how wonderful it was that instead of being nervous and stiff, every student felt comfortable and confident enough to talk so openly about mistakes. I did ask the performers to hold their comments until after the show--part of learning the ins and outs of performance.

We had so much fun and audience members were so enthusiastic that several singers and I have decided to select and rehearse a program of songs for a spring concert. Stay tuned for more information.

The video above is a sampling of songs from the concert. If there is enough interest, we can create and offer DVDs of the entire performance, with charming outtakes. For fundraising purposes, we would charge a fee for a DVD copy. All proceeds would go to Clearwater. Please let us know if you would like a full concert DVD.

Posted by Shawna at 9:00 AM No comments:

As Bob mentioned in the blog post below, we are unexpectedly and excitedly doing a major remodel because of water damage from fire sprinkler pipe that burst during the cold snap in December. We discovered after removing the shattered pipe that insulation around it was inadequate, so the new pipe is now well insulated. We are fortunate to have the skill and professionalism of Odyssey Builders for much of the repair and renovation. 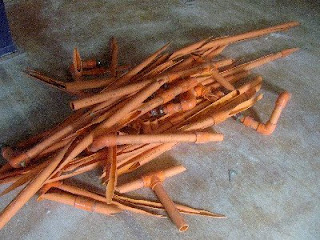 We have wanted a kitchen ever since we left our old location in Lake City and this gave us the opportunity to build one earlier than we thought possible. The former computer room was not high on the list for a kitchen location, but it turns out to be a great size for kitchen counters, appliances and tables for eating. Plus, the building's electrical panel, wiring and plumbing are more than adequate for a kitchen's needs. The computer room is now comfortably located in the former Media Room. 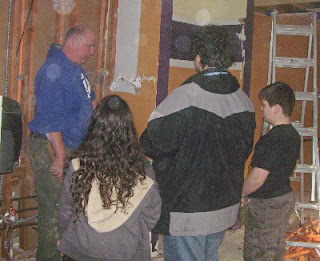 Several students were excited to help staff members and our contractor with some of the more minor demolition of non-load-bearing walls and unneeded counters. 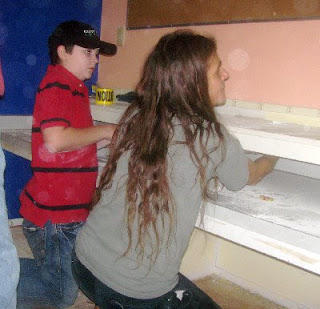 The former music room is being divided into a smaller music room/studio and a separate dedicated art room with a sink. 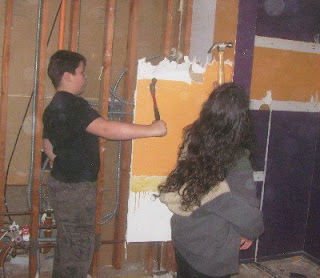 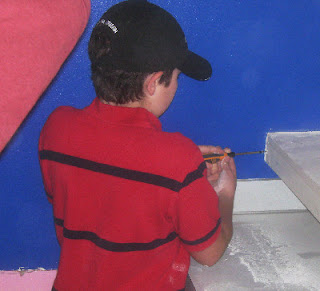 Thanks to the water damage and insurance reimbursement, we have been able to renovate the rooms to best serve our needs, rather than being constrained by the layout of the school that formerly inhabited the premises. School Meeting approved changing the use of the water-damaged rooms and authorized a committee to decide on flooring, paint colors, cabinets and other decisions to complete the remodel. We anticipate that the remodel will be complete within a month.
Posted by Shawna at 9:00 PM No comments:

The Public Relations Committee has been working with a branding firm to help us hone our message. We began the process with Lynn Parker, a principal of Parker LePla , and a friend of Heather Bentley, Miles' Mom. She generously donated her services, and after several months and many hours of Assembly brain power, we have a new message that feels really fresh and concise.

What if kids could vote?

At Clearwater they do.

Every day, students of all ages make decisions that affect their lives and community.

Kids:
Our students are adaptable, self-assured thoughtful people with the skills that actually lead to success.

We were waiting until this process was finished to work on a few other projects. We are now moving ahead on getting some graphics on the bus, updating the logo, and sprucing up the website.

We want to thank Lynn and her team for their time, energy and perspective. It's not possible to briefly describe what went into this statement, but it was a very interesting process and having a team of objective professionals look at what we do and help us describe it was very helpful. We realize that it is impossible to achieve perfection in 153 words, at least if you are doing it by committee, but we like these particular words.

You've all heard about how the sprinkler system in the music/computer building exploded in the freezing weather during the break. Thanks to our insurance (and some other funds) we have been repairing and improving the rooms in that building. Odyssey Builders, our former landlord and general contractor, is doing the work. At the last work party, I snapped a few pictures. We will have a new kitchen (the old computer room) and the old music room is being split up into separate music and art rooms. 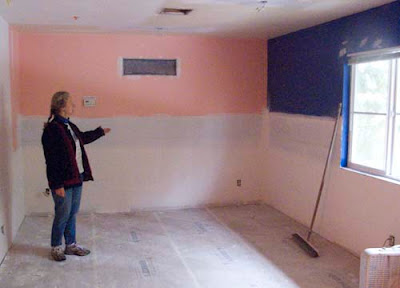 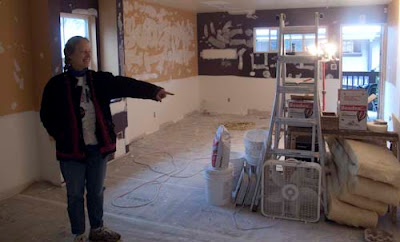 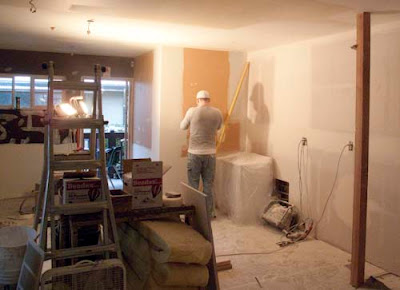 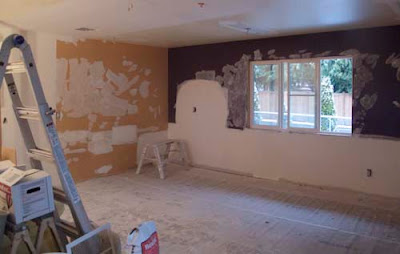 Posted by Bob Freeman at 9:15 PM No comments:

After a brief fling with Costco pizza, we've had a very satisfying relationship with Uncle Peteza's in Bothell for two years now. He gives us a great price, and since the pizza lunch program has started this year we have raised $700. 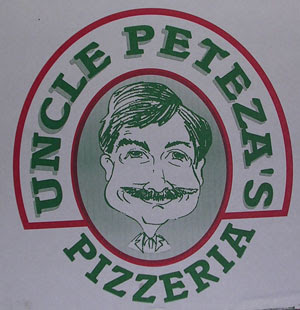 This year, the school has used the money to buy Magic cards (as in Magic the Gathering), melty craft beads and a video game engine program, and is planning on buying gymnastic tumbling mats.

In addition to making pizza the people love, Uncle Peteza is also providing employment for one of our students.

On Saturday there was a great turnout for Game Day. Kids and adults swarmed the school and played all sorts of board and card games, and a rousing game called "Murder" that was as much fun to watch as it was to play. Three hours flew by. 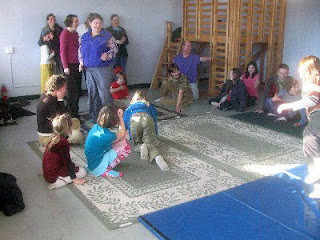 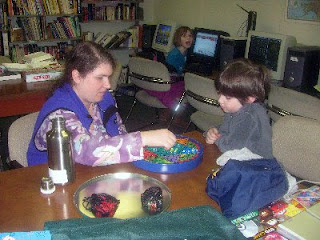 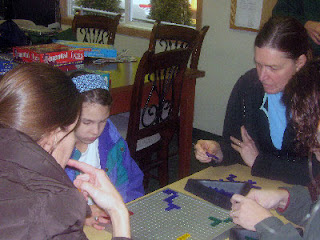