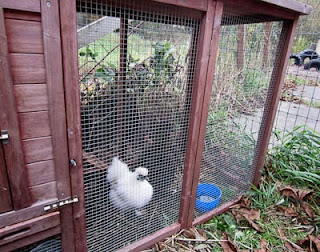 The story of Poppy and Pebble is a good example of how students can make things happen at Clearwater. Adults’ resistance to an idea is not an immoveable obstacle if there is vision, commitment, and follow-through from students. Early on, the chickens were not expected to be permanent residents at Clearwater. A number of staff and students were doubtful about how well it would work, remembering a previous chicken experiment. "The last time Clearwater had chickens, the staff had to take care of them because none of the students wanted to," says Lily. "So they were skeptical." Lily has chickens at her house, and another student had said he wished he could have pets at school. So, Lily said, why not chickens at school again? But how to persuade the school? 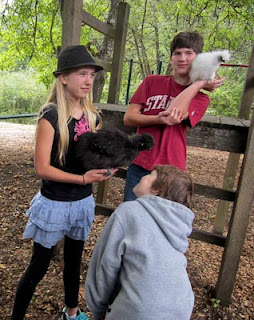 Lily (with Pebble), Gryffon and Brandon (with Poppy)

"We went to school meeting and had a discussion, but everyone said they didn't think it was a good idea. They said we'd have to raise money for the chickens ourselves, and then keep the chickens away from school over the summer." But that was something students were willing to do. "We raised them at homes across the street from the school at first. They were very cute. We named them Poppy and Kiwi." After Kiwi unfortunately met a cat, Poppy was very sad -- young chickens can actually die of loneliness, Lily says -- so Pebble was acquired by the chicken committee. "Once they got old enough to go outside, we asked permission again to keep them at school."

The committee made their case to the interim Summer School Meeting. "The chickens were cute enough to persuade them to say yes," says Jurr. But students had all responsibility for care of the chickens; it wasn't staff's job. Lily, Max, Stevie, Jurr, and Jackie cleaned their coop, gave them food and water, held them, and free-ranged them during the whole summer. What does it mean to free-range a chicken? "You put them out in the grass to walk around by themselves, eating and scratching and taking dirt baths," Jackie and Jurr explain. "We have to watch them to make sure they don't run away, or get killed by a predator like a hawk or a cat." (Lily clarifies though that once chickens get old enough, most cats don't mind them). 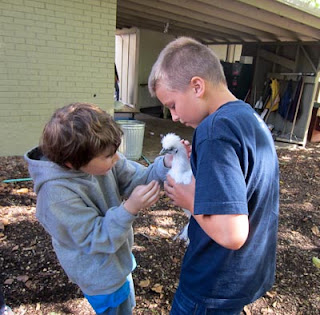 Once summer was over, the committee still needed School Meeting's permission to permanently keep them at school. "We asked again, and by this time they thought we were responsible enough to look after the chickens; it wasn't hard to get it approved," says Jurr. But another obstacle arose when the committee had to consider the requirements of the Health Department regarding livestock at schools. Poppy and Pebble had to wait another two months before the committee had made the proper arrangements and School meeting approved the plan.

The agreement is that the chickens can be housed at the school; the chicken committee is responsible for buying their food, taking them to the vet, making sure they are safe in their coop, watching them when they are out. But most of all, Jackie adds, "we like to hold them." Anyone may hold the chickens if they like, supervised by a member of the Chicken Committee. "They are cuddly and nice, and they don't mind you holding them. They’ll even fall asleep sometimes in your hands. If you move them gently, they will ruffle their feathers or move their tails. Poppy has some wicked tail moves," Jurr says. "And Pebble is adorable." 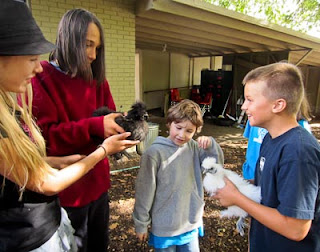 Lily, Arlo (with Pebble), Gryffon and Nikos (with Poppy)

While holding the chickens it is recommended that you wear gloves, and after holding them, it's important to wash your hands with soap. This is because it's possible (though unlikely, Jackie adds) to catch salmonella from a chicken. This was the most serious issue the chicken committee had to face when addressing requirements from the State Health Department. Stevie explained that the chickens also have to remain in an enclosed area even when they are not in their coop, and that staff supervises while the coop is cleaned.

As a breed, Silkie chickens are small, with puffy feathers. They are recommended for kids because they are usually nice and calm. Poppy (white) is a hen and after a period of guessing we are now sure that Pebble (black) is a rooster.
Posted by skholiast at 4:03 PM