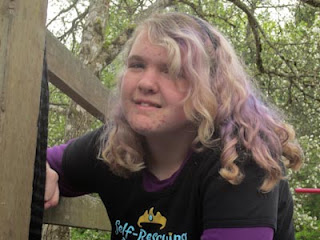 Here are two more chapters of Meghan's original story set in the Warcraft world. If you haven't read or don't remember the story so far, be sure to check out Chapter 1, Chapter 2,  Chapter 3, Chapter 4 and Chapter 5. The story is told from the point of view of Salith, a female half-elf, half-troll rogue.


Salith fell into a horrified silence as the undead shoved Varawien towards the wall beside Salith. Rowna must have seen the look on Salith's face, because she fought viciously against her chains “You horrible son of an ogre!” she screeched, before the pain of her chains became too much. Varawien sniffled softly as the strange purple chains wrapped themselves around her wrists and ankles.

Salith continued to stare hopelessly at her friend as the undead shambled away, cackling. Tears began to form in her own eyes as she thought of Delaralas. The stupid know-it-all, with his stupid magic and his stupid, mysterious rambles about dragons...

Dragons! That was the key. To what, Salith didn't quite know yet, but she felt compelled to raise her head and look at Varawien, who was full-on sobbing by now.

“Vara, how did Del die?” Salith demanded, unable to be gentle due to her sudden need to figure something out.

Varawien drew a great breath through her nose, which resulted in a great snorting noise. Then, with a sniffle, she spoke.
“He....he had killed the man who had stabbed you, and he....he turned around and looked at me with this ridiculous grin on his face, and then....” Varawien choked up. Salith suddenly felt horrible and began to try and set it straight.
“Its going to be alright, Vara. Trust me. What happened next?” she coaxed, gently.

This time, Varawien swallowed hard, then continued.
“He erupted in blue flames, and fell to the ground, charred beyond recognition. With that grin still stuck to his face. The undead who was just here was standing behind him, and....he was.....he was......smirking.” Varawien said the last with such venom Salith wouldn't've been surprised had she spat poison.

Varawien collapsed into silence as Salith pondered this. Dragons....Fire....Delaralas....Suddenly, she whipped her head around to look at Rowna, who she had guessed was a mage, due to the way she smelled.
“Rowna!” Rowna perked her head up, revealing the bent lump that must have once been her nose, in great detail due to the glowing of her chains.
“Yes?”
“Aren't all Dragons resistant to fire!?”
Rowna looked berwilderd for a moment, then thoughtful “Well, depending on the kind...”
“What about Demonic fire?”
“You'd have to be extremely skilled to kill a dragon with Demonic fire.”

Salith's spirits soared. She threw her head up and let out a battlecry, shocking both Rowna and Varawien. She then looked over at her tear-swept friend and grinned the goofiest and most ridiculous grin she could.

Varawien looked worried “Are you alright, Sal? You're scaring me....”

It took a moment for Salith to reply because she was so overcome with triumph and joy.
“I'm more than alright, Vara. Delaralas is still alive!!”
Rowna twitched her arm slightly, as if to hold up a hand.
“Woah, hold up, how can you be sure?”
Salith looked a little more serious for a moment, but was still smiling “I just know.” 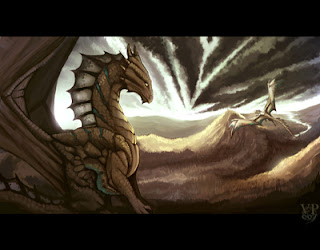 Delaralas gingerly flexed his jaw. It had hurt to keep that grin long enough for those foolish humans and their irritating undead overlord to take Varawien and Salith. He had hated to let them, but it was a necessary sacrifice. After all, they couldn't know he was a dragon--not yet.

He forced himself into a crouch and then began focusing all his energy on transforming. Slowly but surely, his limbs elongated, his face morphed into a snout and horns grew from his ears, spikes sprouted from his spine and a tail wiggled out of his tailbone. His wings forced themselves into being and grew until they where full length and flapping. Scales materialized all across his body. And just like that, Delaralas had become Delaralstrasz, a great bronze behemoth of a dragon.

With a flap of his wings, he rose into the air and began his journey towards his captive friends and their elusive captor, the notorious Elzaer. A beautiful and deadly force to be reckoned with.

“The preparations are almost complete, Milady. Soon, the Half-breed will meet her fate at the hands of the great Ol'kai.r”
“Wonderful. You never cease to amaze me. Cerader”
“Thank you, Milady.” The death knight bowed. “As do you.”

Elzaer waved a clawed hand and the image of her pawn vanished. She was growing weary of his simple flattery, but he was an ideal pawn for he thought that he was in control. He was arrogant enough to believe that he was the king and that she herself was merely his pawn. But, of course, he was foolish in thinking so. He could barely be called a knight, let alone a bishop or castle. King was completely out of the question.

Besides, every sensible person knows that the real power lies with the Queen.