Those of you who have been following Meghan's original story set in the Warcraft world are long overdue for the third installment. If you haven't read or don't remember the story so far, be sure to check out Chapter 1 and Chapter 2.  If you'd like to re-read the first chapter, click on the link above, then enjoy Chapter 3, below. The story is told from the point of view of Salith, a female half-elf, half-troll rogue.

Salith awoke to the sound of thunder rumbling in the distance. She got to her feet and looked out of her cage at the sky where clouds so gray they were almost black gathered on the horizon.

“A storm is brewing,” she said, grasping the two nearest bars and gazing out at the darkening sky.
“Indeed.” A cool voice came from behind her.
Startled, Salith whipped around and bared her teeth.
“Who are you?” she demanded as thunder rolled once more.
“I am known as Delaralas(1),” the stranger replied.

He wore a long emerald cloak and leather garments, half-concealed by the cloak. As he pulled down his hood Salith realized he was an elf, with long purple-ish ears and markings painted across his face.
“What are you doing here?” Salith’s accent faded and she hid her tusks.
“I am here to rescue you. Don’t bother hiding them, I know what you are,” he said.
She scowled and showed her teeth, eyes flashing.
“Why would you come to rescue me? You’re an elf of high-birth and I’m nothing but a lowly half-breed. I don ‘t get it.”
Delaralas shook his head and exhaled softly.“Heh. Neither do I, my friend, neither do I.”
Salith spat contemptuously while lightning flashed behind her.
“Anything but, elf!”

Delaralas actually laughed, echoed by thunder, closer now than before.
“Come now, you don’t want to be stuck in here when that storm hits, now do you? Grab my hand and we’ll get out of here,” he said, sticking out his hand and stuffing the other into his robe.
"I’ll have to trust him…" Salith thought.
She grabbed his hand and just as their palms touched, the storm broke.

“Mount up!” Delaralas called above the roaring of the wind.
Salith put her foot into the loop and swung her other foot over the majestic palomino’s back and hooked it in the second loop. Delaralas waved a hand back at her, signaling for her to follow.
“We’ll follow the road as far as Heluk, then shelter there until the storm blows over. Don’t worry about stealth. No one else is crazy enough to be out in this weather.”

He nudged his horse and sped off towards the open gates of the castle. Salith nudged her horse, who reared and followed Delaralas’. As they galloped out of Dunatar and along the winding dirt road the storm raged overhead. Rain turned the road to mud and soaked all of Emerald Forest. Lightning struck a tree near Salith, causing her horse to rear and race to the side. Salith had to tug hard on the reins to get back on course, but she managed to get her mount, whom she had come to call Bandit because of the white stripe across his eyes like a bandana, to run behind Del’s mount.

They travelled half a day before coming upon the small town of Heluk. They tethered their horses to the post outside the inn and walked inside. It was a large room with several small tapestries hung on the walls and tables of all sizes and occupancy. A fireplace flickered warmly in the far corner near a window spattered with rain, and a staircase led up to the rooms. The only people in the inn besides them was the innkeeper, a small and stout man with a long braided beard, along with a mustache and an unkempt splash of hair on his head, and a hooded figure with purplish ears sticking out of the hood of a long lavender cloak. Thick leather gloves covered the longish fingers that grasped a large tankard and a scroll of parchment. “Welcome to the Emerald Dragon, make yerself at home!” called the innkeeper. The hooded figure took no notice of them at all. 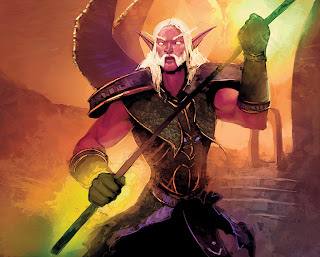 While Delaralas was ordering drinks, Salith sat down at a table near the fireplace and stared into the flames.
“Head in the clouds--or rather, flames?” said a voice.
Salith turned quickly to find that the stranger in the lavender cloak had left the bar and was standing next to the table, hand on the nearest chair.
“And you are?”Salith asked, rather snappishly.

The stranger pulled forward the chair and sat down swiftly, causing her hood to fall down, revealing a face resembling a female Delaralas, though a lighter purple color and with different markings.
“Varawien(2) Silentwind, Elven rogue. At your service!” The stranger did a sort of mock bow, then sat up straight and looked Salith in the eyes. “You?”
Salith wasn’t sure she should reply, but was saved the trouble by the arrival of Delaralas with drinks.
“I spotted you and went ahead and got an extra one,” he said, handing a tankard to Varawien and another to Salith.
“Varawien Silentwind, Elven Rogue, At your service!” The elf repeated the mock bow to Delaralas, who returned it. He reappeared with a ear-to-ear grin on his face (if that was possible).
“Delaralas Bronzewing. Pleasure.”
Salith reluctantly gave in. “Salith Daggerfang.”

Their greetings where cut short as the door of the inn crashed open. Silhouetted by the flashes of lightning, was a huge and thuggish looking human, bearing mail armor and wielding a huge longsword that nearly touched the ceiling.
“Where is Half-breed?” he said. His voice was deep and he seemed to be having trouble speaking in Common.

Salith blinked, then pulled up her hood and vanished. Delaralas stood up swiftly, but Varawien was faster. She was on her feet, daggers out and twirling madly in her hands. She spun around and threw one at the man. It whizzed past him as he sidestepped, and stuck in the opposite wall. He swung his longsword in a wide arch, aiming for Varawien’s neck. She ducked and ran at him, dagger upraised, ready to strike, but the man stuck out his hand and grasped her by the throat. Dropping his weapon, Delaralas leapt to his feet and put his hands out in front of him and began muttering a chant. Balls of arcane energy formed around his hands. He chanted a few last words, then threw the balls at the thug. They hit him square in the chest and he fell forward, smashing a table and releasing the struggling Varawien. She fell to the floor, gasping for breath.

Salith reappeared next to her and was about to help her up when she stopped. Someone was clapping. Looking up Salith discovered it was a tall woman, clad in shining plate armor and helm. A great battle ax hung from her back. She was clapping and watching them through her visor. “Bra-vo,” she said, flicking up her visor. “Now, which one of you is the Half-breed?”
Salith kept her hood up, turned back to Varawien and stuck out her hand. Varawien took it and pulled herself up.
“We don’t know what you mean. There is no Half-breed here,” she said, sheathing her remaining dagger and brushing away the dust on her chest.
The human laughed.
“Who is she?” Salith whispered to Vara.

“Afeiclya(3), a general in Lord Cerader’s army.”
Salith stifled a gasp. “She’s Cerader’s general!?” Vara nodded grimly.
“She’s the worst. Most of the soldiers that she was assigned to train don’t make it out alive.”
Vara repressed a shudder as Afeiclya surveyed them closely.
“I’d have to agree with Miss Varawien. There is no Half-breed here,” Delaralas chimed in.

Afeiclya laughed again, though there was no mirth.
“Then, who is that?”
She gestured at Salith, who took a deep breath.
“I am Sierra Fiercewind, daughter of Erilikoth(4) Fiercewind and heir to the throne of Alin’kah castle. I have been sent to find Qigof(5) and Hydira(6) of The Emerald Grove and bring them back to speak with my father about matters.”
Salith said this very fast and finished with a flick of her hand in a very dismissive manner.
“Now, if you don’t mind, we’ll be leaving.”