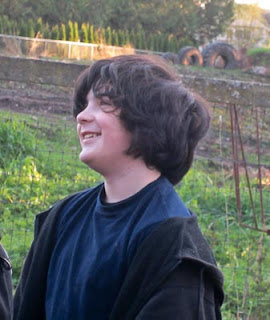 Aidan, who is 12 and has attended Clearwater for 6 years, recently started a blog called The Rest of the Iceberg. He describes the focus of the blog this way: "Whatever happened to the rest of the iceberg? Underneath the tip of it you'll find bite-sized short stories, rambling rants, inner thoughts and strange musings."

He'd thought about starting a blog for a little while. One night when he couldn't sleep, he decided to go online and see if he could set one up on his own. Voila!--The Rest of the Iceberg. He sometimes has insomnia and discovered that writing down what's in his head helps quiet his mind.

Aidan's first post is a short story called, "Cogs and the Lack Thereof", which takes place in a dystopian future and is a delightful commentary on creativity and its ability to change the world. Another post, "Creative Evolution", features a character he created while playing World of Warcraft. He describes that story as "the first thing i ever wrote, unedited complete with no punctuation and general painful-to-read-y-ness."

With Aidan's characteristic gutsy-ness, he publishes it raw in the blog. Later in the same post he reveals what happened to that first story after he spent six more months working on it. In my interview with him, he quoted Oscar Wilde, "Books are never finished, they are merely abandoned." Although, he doesn't enjoy re-reading his past work, he recognizes that he is always learning more about writing by doing it.


When Aidan began writing, he read several writing blogs to get other writers' advice on the craft of writing. He said he waits for inspiration to strike and like many writers feels like he knows his characters personally.

He admires Neil Gaiman, Lemony Snickett, Jasper Fford (Shades of Grey, One of Our Thursdays Is Missing) and Robert Kirkman (writer of  the comic series The Walking Dead and Invincible).

Aidan incorporates links to music in some of his stories. So far he has written two posts featuring Victor Jerami, the titular unorthodox demon hunter, who slays demons by playing rock music. Each post has links to specific songs used to dispatch the monsters. One of Aidan's inspirations is the Joss Whedon TV series, Buffy, the Vampire Slayer. The title character of that series is not-so-subtly alluded to in the second Victor Jerami post, "Unarmed and Unplugged."

He does not have a posting schedule for himself and warns there may be long dry spells, but also times when he posts several entries at once.

At this point in his life, he is interested in becoming a career writer of fantasy and science fiction novels.

Aidan's mom, Alicia, announced his blog on her Liberating Kids facebook page and noted, "He was never formally taught to read or write." Aidan told me he started learning to read when he was three or four. He used some reading software initially, and reads a lot. He taught himself typing by using the online chat function while playing World of Warcraft.

I look forward to reading more of Aidan's writing.