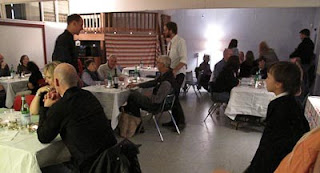 Active Room becomes dining room with atmosphere
On Saturday, November 6, the three students in Clearwater's Master Chef program and Mat Riggle, staff member and skilled chef, produced a five-course French dinner for 30 people. The evening was the first of three or four gourmet dinners the master chefs plan to prepare this year to raise money to add to and improve Clearwater's kitchen equipment. 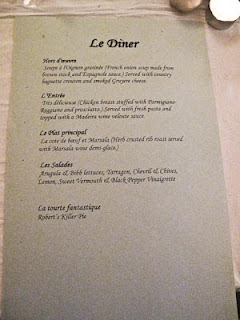 The menu
Robert (16) and Braden (18), worked with Mat in March to design and create a dinner to raise money for their two-month stay in Denmark. During the 2009-10 school year they cooked a variety of foods each week. This year, they are joined by Lucas (17) and are undertaking an in-depth study of a number of world cuisines. They are learning how to take basic elements to make building blocks such as stocks and sauces, then they create original dishes based on those building blocks.
To make one of the dishes for the November dinner, they dry-roasted beef marrow bones, which were then cooked for hours with water and vegetables to become a basic brown stock. 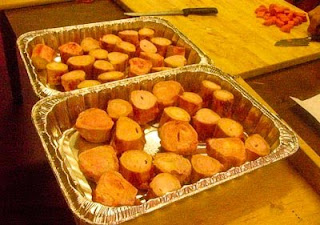 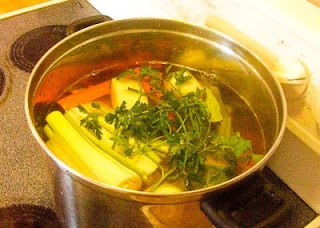 Brown stock underway
From the brown stock they made an espagnole sauce, which then was used to create a Marsala wine demi-glace. Brown stock and espagnole sauce went into the first course--French onion soup. The demi-glace was an element in the Marsala sauce served over the herb-crusted beef rib roast. 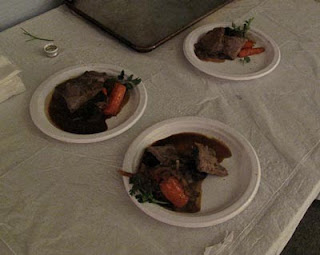 Beef course with Marsala sauce
The dinner was on a Saturday and the chefs began the process of making the demi-glace on the previous Tuesday. Work continued on Wednesday and Thursday, and then all four cooked all day on Friday and Saturday until dinner began. 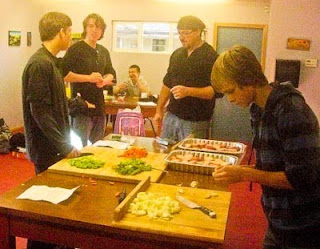 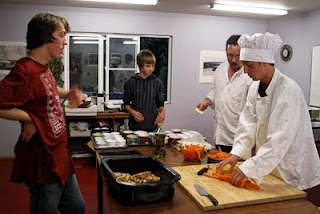 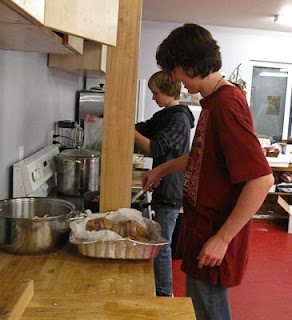 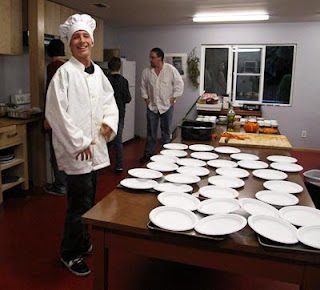 Robert in chef uniform with empty plates on Saturday
The chefs also made a Madeira wine veloute sauce using chicken bones. The sauce accompanied a chicken breast and pasta dish, a favorite of many of the diners and two of the chefs.

Lucas made several batches of roux for the chicken veloute and joked about gu-roux, so I dubbed him the guru of roux. 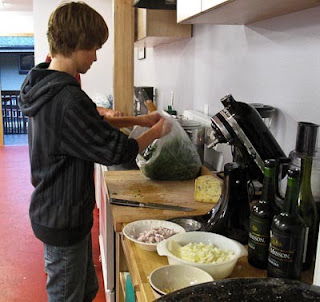 Lucas, the guru of roux 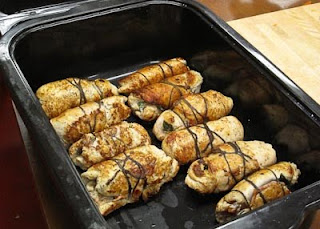 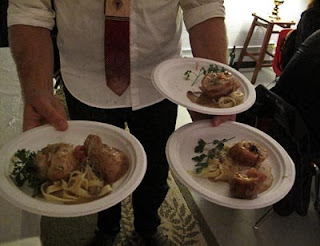 Chicken breasts & pasta with Madeira wine veloute sauce
The four cooks used four pounds of butter, seven pounds of flour, 30 pounds of bones and more than 150 ingredients to make a five-couse meal for 30 people. By the time all the courses were served, they had prepared a total of 160 plates.

Two students and two staff members served diners with speed and efficiency, ensuring that each course was just the right temperature and freshness. 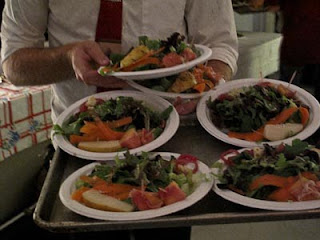 Salad, the fourth course
Those of us who dined that evening enjoyed wonderful food and stimulating conversation. The fifth course was Robert's amazing apple pie a la mode. A delicate, high-quality olive oil was drizzled over the ice cream--delicious. If my camera's battery hadn't run out of juice, you'd be able to see photos of the pie. One diner, who's lived long enough to try and probably make lots of apple pies, said it was the best apple pie she'd ever eaten. 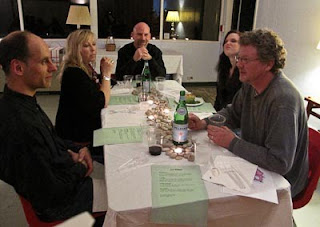 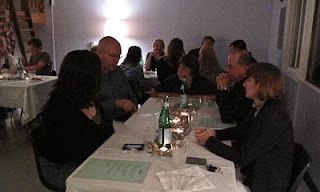 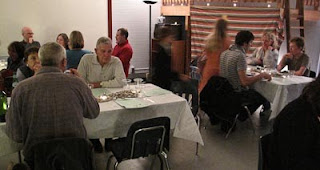 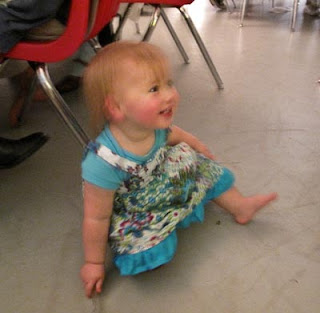 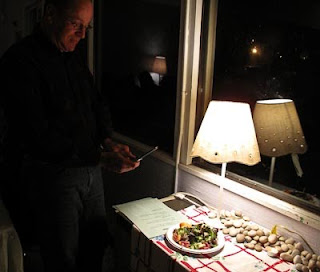 Robert's proud grandfather photographed each course
As a bonus, Corey Campbell, 2007 Clearwater graduate, singer/songwriter and Evergreen State College student, traveled from Olympia to sing and play for us. It was a perfect ending to a delicious, skillfully-prepared dinner. 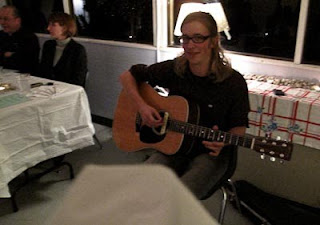 Corey performed his original songs
It was a really wonderful evening and I can't wait for the next.