The Complex Story of Salmon in North Creek

This post is a departure from news about daily life at Clearwater and thoughts on Sudbury philosophy and practice. I was inspired by our Clearwater sockeye salmon, returning in much larger numbers this year to spawn in North Creek, to find out more about their story. I turned up information that I found surprising and fascinating. If you'd like to know more, read on.

A few weeks ago, I took a video of some salmon swimming upstream in North Creek on Clearwater's campus.

The Clearwater School is working with Snohomish County Surface Water Management to extensively restore our portion of North Creek to improve salmon habitat for spawning fish, eggs and fry. Thanks to a $75,000 grant, restoration work will begin in earnest next spring.

Around the same time our salmon started returning (descendants of salmon that spawned in 2006), the Seattle Times published an intriguing article . From that article I learned that sockeye that swim from Puget Sound up the fish ladder at Hiram Chittenden locks in Ballard to spawn in the rivers and creeks flowing into Lake Washington are not native to that system. They are descended from sockeye planted from a Skagit River tributary in 1935 and from a temporary hatchery on the Cedar River. North Creek is part of that system, flowing into the Sammamish River, thence to Lake Washington and the ship canal and out to Puget Sound. The Washington Department of Fish and Wildlife website briefly describes how sockeye came to be introduced into the Lake Washington watershed.

The salmon that are native to our rivers and creeks are chinook, coho and kokanee (a freshwater sockeye relative). However, unlike juvenile sockeye that are adapted to spend a year in deep-water lakes before heading to sea, chinook and coho need to mature in rivers and streams. Native salmon species are not doing well at all because our urban lakes and streams are befouled fish habitat. As a population we are not effectively enforcing the laws we created to preserve and restore stream habitat.

More after the jump...
Sockeye survive in larger numbers because they don't need to spend as much time in creeks before heading to sea. They also benefit from being reared in a hatchery. We are all spending $45 million to build a permanent sockeye hatchery on the Cedar River, then tag and track sockeye because of their value as a fishing resource. These non-native fish are not endangered, so there's little incentive or political will to clean up streams and rivers in which they spawn. Despite the fact that we're spending lots of money to preserve a non-native sockeye fishery, the returns have not been good enough most years to even open up fishing, beyond the treaty-guaranteed rights of local tribes. 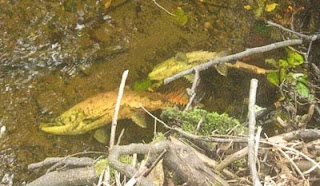 For a short time, two dead salmon were easily visible near the foot bridge across North Creek. There's no way of knowing whether these two fish completed their mission successfully by laying and fertilizing eggs.
Washington Fish and Wildlife counts the sockeye that return through the Ballard locks each year. The counts since 2000 are available on their website. In 2006 a large number of sockeye returned through the locks--418,015, in fact. In 2007, only 60,117 came back. In 2008 there were 33,6259, and in 2009 only 21,718 returned. On Clearwater's section of North Creek, we did not see any sockeye during the past two years. Despite the fact that we saw more fish in our creek this year, the total return (156,752) was little more than a third of the parent population that spawned the current generation four years ago. Chinook and coho numbers are more dismal--10,565 and 3,608, respectively. 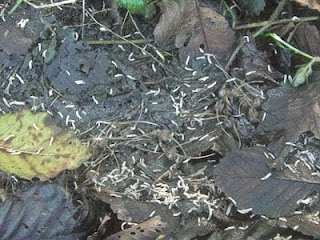 An animal dragged a dead or dying salmon onto the creek bank at school and left a lot of it there. This photo shows the very end of this fish's life cycle. Its flesh has become food for other creatures, including maggots. Little is left but a few thin bones.
There is one more wrinkle to this story, as I know it so far. At least one person knowledgeable about the history and practice of salmon management in the Lake Washington watershed believes that many of the fish spawning in our little local creeks are in fact native endangered kokanee, not introduced sockeye. If that were proven to be the case, it would become necessary for counties and municipalities to enforce stream habitat preservation laws. That is something various public and private interests would find at least inconvenient, and at most extremely expensive.

There is obviously more to this story and more research to be done. We know our current urban living style is not healthy for fish or the wildlife that depend on them. It is easy to feel overwhelmed and discouraged by the scope and complexity of the problem. To solve it requires consistent, informed action and a commitment to live sustainably by us, the inhabitants of the Puget Sound area. Our school's restoration efforts may be small in the scheme of things, but I treasure being part of a school community that is actively working to create better habitat for salmon, other creatures and humans.