The following post is reprinted with permission of the author and the host of the blog where it first appeared. Our thanks to both of them for allowing us to include this piece on Clearwater's blog. Author Shoshana London Sappir is a founder and staff member at Jerusalem Sudbury School in Israel, one of Clearwater's sister schools. Blog host Michael Sappir is a graduate of Jersalem Sudbury School and Shoshana's son. A linguistics undergrad at University of Leipzig (Germany), he has written a number of blog posts on education and his blog is highly recommended. You'll find a permanent link to his blog on this blog's "My Blog List". 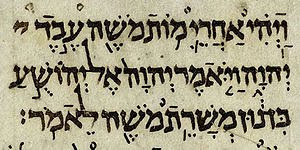 A few years ago my husband and I attended a lecture by linguist Ghil’ad Zuckermann, presenting a provocative theory: the Hebrew we speak today is closer to the European languages of the early Zionists than it is to classical Hebrew, even though most of its vocabulary is Hebrew; therefore, Zuckermann proposed, it would be more accurate to call it “Israeli” than “Hebrew,” letting go of the romantic notion that Israelis today speak the language of the Bible. Our conversation about this idea went on for days after we came home, sweeping up the whole family; later, Michael even wrote a term paper about it.

So it was only natural that when I saw the translators’ association to which I belong had scheduled another lecture about the genealogy of Modern Hebrew, I asked if anybody would like to go with me. Perry said he would and we both looked forward to a pleasant evening in Tel Aviv. I dutifully registered in advance. Next to Perry’s name I added: “14 years old.”

On the hour-plus drive we discussed the upcoming lecture. The speaker was a researcher who was studying the structures of spoken Hebrew and was going to present us with her findings as to whether they had more in common with European languages or with Hebrew, and whether, indeed, this language was Hebrew. Perry was already inclined to believe it was not, because he cannot understand the Bible without an intense explanation or translation: he welcomed the new translation of the Bible into Modern Hebrew and has begun reading it.

At the registration desk a colleague of mine searched for my name on the list, crossed it out and started writing me an invoice. I noticed the total she had entered, and started to protest, “what about him?” – but thought the better of it mid-sentence and shut my mouth; if minors got free admission, who was I to argue?

During the lecture we tried not to disturb anyone with our excited whispering and exchanges of meaningful looks of agreement, surprise or exasperation over certain points in the presentation or behaviors by members of the audience: one woman stormed out not ten minutes into the lecture, shouting at the speaker: “Shame on you!” for doubting the unbroken chain between ancient and modern Hebrew. Another translator prefaced a question about the effectiveness of correcting linguistic “mistakes,” by saying: “If my 15-year-old son had his way, he would spend his whole life lazing in front of the computer and television,” which elicited a room full of nods and sighs of agreement. Perry and I rolled our eyes at each other and clenched our teeth, as if to say: “Just look how people talk about children.”

On our way out of the room for the break, one of my friends turned to Perry, and asked in a kind but patronizing tone: “So, did you fall asleep?” More awake than ever, Perry replied with a startled: "Huh?”

Conclusion after the jump...
Suddenly I started seeing a pattern: my friend was assuming Perry wasn’t there of his own will but was forced to suffer in boredom while he waited for his mother. As if a child couldn’t possibly come to a lecture out of interest, just like we did. Could that be why they hadn’t charged him admission?
Just by looking at him and noting he is of school age, did everyone take it for granted I made him come because I didn’t have a babysitter? Did the organizers let him in for free as a favor to me, allowing me to use an extra seat because they thought I had nowhere else to park him?

It reminded me of the story about the guy who comes to a movie theater box office carrying a crocodile under his arm, and says: “Two, please.” The teller says: “Sir, don’t you think you should take that crocodile to the zoo?” “Thanks,” he answers, “but we already went this morning.”

Sitting down in the lounge with our refreshments, we analyzed the evening. We agreed that people were so upset by their preconceptions’ being challenged that they hardly let the lecturer speak, interrupting her with questions and comments from the beginning.

The next day I sent an e-mail to a colleague whom I had seen at the lecture, with some information she had asked for. On a personal note, I added: “My son really enjoyed the lecture and would like to come to future events.” To which she replied: “That is SO funny! What an adorable geek!” I answered: “What is funny is that everybody thinks he came with me because I didn’t have a
babysitter. He really came because he was interested.” She replied, by way of apology: “My son’s a geek too.”

But Perry does not consider himself a “geek,” nor is he considered one by others. The idea, I gathered, is that it is unusual, and what’s more, uncool, for a teenager to pursue intellectual interests, especially at an “adult level.” The geek label implies that such a child is probably uninterested in sports, music and girls, socially awkward and unpopular, living the lonely life of the misunderstood, his best friend being his computer.

Perry knows what a geek is; he just played one in a teen musical about geeks and jocks, the American high school stereotypes. But such categories have never meant much to him. From the first grade Perry has been attending Sudbury Jerusalem, where students are not divided by age and mix freely with each other and with the staff. They are free to pursue whatever interests they have at a given time with whatever means available: play, books, the Internet, but primarily conversation with other children or adults.

Maybe it is because of this upbringing that Perry has never internalized a hierarchy of subjects of interest and activities, rating them as childish/adult, work/play, serious/frivolous, cool/geeky. He has always flowed with his interests, at times devoting intense attention to one thing and then moving on to another. In the early years of school he was very interested in climbing on door frames and walls and leaping from high perches; we nicknamed him Spiderman. He went through an Ancient Egypt period and still likes to go to the museum and decipher hieroglyphics. He spends a lot of time playing the piano. He has a rock band with some school friends. In the last couple of years he has become politically aware and sometimes comes to demonstrations with me.

Perry is still a child and we treat him like one: we support and protect him, attempt to know where he is at all times and keep him safe. But the status of child should not be a barrier that keeps him out of the adult world insofar as the environment in question poses no danger to him. He is just as mentally capable as any adult of hearing a lecture about the Hebrew language, and a lot more open-minded than some language professionals.

Sometimes we are startled to be reminded we live in a world where adults have such a skewed view of children: if they spend a lot of time on their computers, like us, they are presumably brain-dead. If they show signs of interest in their culture, they are freaks. I suppose the ideal, non-threatening child, in this view, would be penned up in his classroom with other members of his ilk, dutifully performing age-approved tasks dictated by adults – but not too enthusiastically.

Email ThisBlogThis!Share to TwitterShare to FacebookShare to Pinterest
Labels: language, respect for children