Clearwater's Table at GeekGirlCon a Success 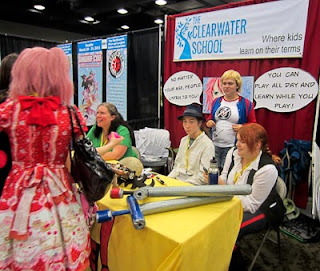 Brenda, Gabriel, Kallisti and Meghan at booth with cosplaying attendee


As mentioned in last week's post, The Clearwater School participated as an exhibitor at the second annual GeekGirlCon. Thanks to a great design by Clearwater parent, Brenda Conken, and Clearwater staffer, Mat Riggle, plus silkscreening and booth art by Clearwater parent, Elrond Sheppard, our booth looked great! We were sandwiched between Sakura-Con and a Lego jewelry booth. 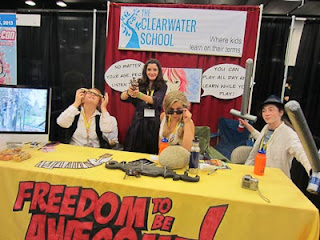 
Table staffing duties were shared by Clearwater students (Gabriel, Meghan, Alise, Kallisti and Maddy), parents (Brenda, Kelley Sheppard, Susan Milton and Amanda Klein) and staff (Shawna Lee). It is common for exhibitors to hand out swag (appealing trinkets or edibles) to attendees. Brenda thought Tarot cards were a memorable handout at another con and suggested handing out single cards with Clearwater's name, URL and phone on the back. Kallisti also donated a bunch of fortune cookies of different flavors to  give out. 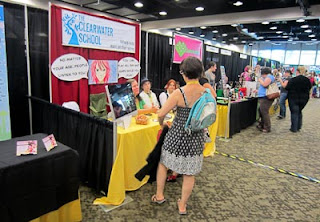 A lot of people came by the booth for a Tarot card or fortunate cookie, and a good number of those wanted more information about the school. The con was also fun for Clearwater table staff. Several of them took breaks from staffing to take advantage of panel discussions on various topics, including "Steampunk Sewing", "Really Make Your Own Videoblog", "The Last 'Outsider' in Popular Culture - Disability", "Spotlight on Purple Reign", "Comedy Web Series: 'Standard Action'", "So You Want to Write (and Finish) a Novel", and "Writing for the Young Adult Geek". 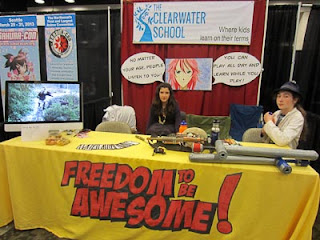 In short, it was a fun event to be part of, and we got the word out about The Clearwater School to a great audience. We hope to be a part of GeekGirlCon again next year.
Posted by Shawna at 3:50 PM

Email ThisBlogThis!Share to TwitterShare to FacebookShare to Pinterest
Labels: publicity