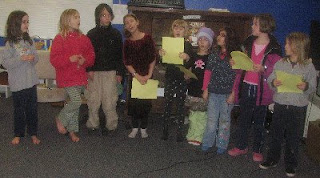 For the past three weeks, nine students and I have been preparing for a school performance of Christmas carols. If the weather holds we are all excited to sing tomorrow at 3:30pm.

This project began soon after the Thanksgiving break, when some of us sang carols on the bus ride home. I asked the singers if they would be interested in practicing singing carols at school and giving a performance. They all thought it sounded like fun and we invited other students to join us the next day.

At our first meeting we all named carols we wanted to sing and sang samples of each. We agreed on eight songs: older, sacred, modern, secular and most of them lively. Several songs were unfamiliar to some, but everyone wanted to learn and sing all of them. We started out meeting once a week, but during the past two weeks we've met three days a week.

It has been wonderful working on this project and seeing the commitment each singer has to rehearsing, learning songs and singing in a group. They all practice the songs at home and at school, even when they're not in rehearsal. The singers are a high-energy group and have dramatically increased their stamina for standing together in one place for the length of eight songs. We have also had to negotiate whether to include the extra bits at the end of phrases in "Rudolph, the Red-Nosed Reindeer". (You'll have to attend the performance to find out what everyone decided.)
If snow doesn't close school tomorrow, I will video the performance and put a clip on the blog. Happy holidays everyone!
Posted by Shawna at 1:30 PM